Operating data for the Saputo WWTP Hinesburg facility shows a significant increase in flow and loading for March to July two year comparison.  Effluent quality remained consistent throughout the trial period in spite of the increased loading on the facility and was regarded as good.  The sludge surplusing data required a mass balance approach to adjust for the flow and quality changes witnessed.  The FGX3 trial demonstrated a significant reduction in sludge disposal tankering costs allowing for the data adjustment . The potential to save about $500/day for a 4.9:1 payback on the cost of FGX3.  Comparison  to earlier years June/July period adjusting for flow and loading alone, the savings were $232/day for a payback of 2.25:1.  Effluent phosphate levels were controlled quite well during the trial period, but it was difficult to determine the degree to which FGX3 or alum coagulant increase majorly contributed to this success.  Additional evaluation reducing the alum feed will provide further reductions in sludge disposal costs and indicate the contribution of phosphate reduction attribituble to FGX3.

Measuring improvements in an industrial or food processing wastewater treatment facility, such as Saputo, can be somewhat challenging compared to a municipal wastewater facility due to the unpredictable variation in flows and loading received into the facility. This is especially true when significant increases in production occur so creating a baseline or relevant milestone by which progress is measured can be difficult.  In the case of the Saputo facility, for example, the flow and loading treated in the plant increased 31.25% for the trial period March through June versus the same time period the previous year.  Likewise, the amount of milk processed for the same time periods also increased by 25.23%, confirming the significant increase in cheese production, and therefore, the increased pressure on the wastewater treatment facility.

Three factors need to be considered in evaluating the sludge reduction data for the Saputo facility:

The Saputo wastewater treatment facility experienced a significantly greater influent flow (> 30%) for January through June compared to the same time period the previous year.  Likewise, the amount of milk being processed also increased by over 25%.  These factors combine to place a greater burden on the facility and will, under normal circumstances, produce a concomitant increase in sludge production.  This increase in load received by the wastewater treatment facility can manifest itself in many other ways, including lower terminal dissolved oxygen, and poorer effluent quality, particularly if the treatment facility is nearing its design capacity.

The next point for consideration is the control of biological solids, or MLSS, in the treatment facility.  Under ideal conditions, the operator will normally attempt to operate the facility at a uniform level.  Because the Saputo facility does experience high organic loads and large variations in the incoming load, the plant normally operates a MLSS level of approximately 8500 mg/L.  Since the use of FGX3 reduced the production of biological solids, the MLSS levels would decrease unless the amount of sludge being wasted is reduced.  A drop of 500mg/L in the MLSS means that an extra 1.9 Tonne was wasted, that should have been retained in the treatment process.  Eventually, the operator must reduce the amount of sludge being wasted to regain the target MLSS in the aeration tank.

The last factor must be considered in measuring sludge production or sludge hauling costs, that is, the amount of alum being used to reduce the phosphorus levels in the wastewater effluent.  The alum being used is a 50% solution with a specific gravity of approximately 1.45.  This yields a weight of 1.4 Kg/l,  that is contributing to the total sludge being hauled from the facility.  Therefore, for every litre of alum that is added to the wastewater to treat the phosphorus, $0.9 is added to sludge hauling costs.  In calculating some of the sludge-hauling numbers over each year, we have calculated the differential in those numbers since heavier use of alum has been used since January to meet State of Vermont goals for phosphorus discharge in the wastewater effluent.

The “Proposal” for the FGX3 trial had a  primary objective to reduce the amount of sludge being hauled from the facility.  The time required to optimise the biology in the facility runs between one and two sludge ages, or approximately 30 – 60 days.  At that point, we should be achieving the optimal sludge reduction.  Therefore, we would determine the sludge reduction based on the 61 – 120 day period of the 120-day trial.  We suggested that we used the average tons of sludge hauled for the first two quarters for the previous two years as a guideline for evaluating the effectiveness of FGX3.  While this was not perfect because sludge surplusing is normally higher as you move into the warmer season, this seemed to be the most practical approach to achieve a quick trial outcome.

Sludge reduction was evaluated using two different baselines.  The first method for determining the sludge reduction savings was calculated for the 61st day through the 120th day of the trial, or May 21st through July 20th, comparing two years.  In this case, we were able to incorporate the shift in MLSS and the additional burden from the higher alum feed rates for the latter year because of available data.  The second was comparing June and July of the latter year versus those same two months for the previous three-year period of.  Since we only had data through to July 27th of the trial year, the data is compared on a dry ton per day basis.  This data is adjusted for the differential in the load/flow for June/July the previous year.  We did not have the required information available to analyse the effects of changes in MLSS or alum usage, which would also affect the sludge results.

It should also be noted that three rather significant “spills” occurred in July of the trial year and would have contributed to an unknown increase in the load to the treatment facility and resultant sludge production.  These spills occurred on July 1st, 11th, and 14th.  Some of this material may have been diverted to the spill tank, but precise values have not been determined.  It should be noted, however, that the dissolved oxygen, which had been running at approximately 2.5mg/L prior to July 1st of the trial year, dropped dramatically on July 1st to about 0.69 mg/L, indicating a significant increase in the influent loading.  These spills, in conjunction with the high lagoon temperatures (º33º – 34º C.) also contribute to the low dissolved oxygen levels.  The May 21 through July 20, control year to trial year follows:

The sludge hauling figures, when compensating for the significant differential of wastewater flow and loading into the treatment plant, shows a reduction of 0.110 dry tonnes per day of sludge being tankered.  The cost of sludge disposal was set at $1172.45/dry ton, reflecting a savings of $167.66/day.  The cost of feeding FGX3 is $103.66/day, resulting a total net savings of $64/day, with a payback of 2.6:1.

However, the MLSS in the lagoons dropped from 7500mg/L. to 6000mg/L. between May 21st and July 20th during the trial period and based on a total capacity of 3,780 M3 for the lagoons, this means that a total of 5.738 dry tonnes was wasted that should have been retained in order maintain an equilibrium MLSS value of 7500.  It should be noted that throughout the trial period, the MLSS values were declining and maintaining equilibrium MLSS value of 8500 mg/L. is the goal.  To understand the true value of FGX3 dosing, we must also compensate for the excess wasting during this time period.

These figures are as follows:

The sludge hauling costs, when adjusted for changes in both increased flow/loading and MLSS levels in the lagoons, show a reduction of 0.256 dry tonnes/day.  This translates to a savings of $390.19/day, or a net savings of $286.53/day, with a payback of 2.76:1.

Incorporating the third factor, alum usage for phosphate control, results in an even more favorable conclusion.  Phosphate levels in wastewater effluent have become a major issue with the state and federal EPA agencies, with new and stricter regulations currently being introduced.  Since the beginning of the trial year, Saputo has undertaken the task of reducing and better controlling the levels of phosphate in their effluent achieved by increasing the amount of alum in the treatment process.

Clearly increased alum usage translates directly into increased sludge.  Comparing the May 21st through July 20th time periods for trial year and the previous year, we find that alum usage had increased from approx. 15.838 M3, to 19.111 M3.  Based on 0.714Kg per litre of alum of solution, the increase in alum consumption was contributing a total of 7.532 dry tonnes to the sludge composition in the trial year versus that of the previous year.  Using the figures from the flow/loading and MLSS adjustment data, the alum differential appears as follows:

When accounting for essentially all of the operating changes in the Saputo WWTP, the effects of FGX3 are dramatic.  If all operating conditions were equal between the two like time periods, FGX3 would, in fact, account for a nearly 50% reduction in sludge disposal expense; 0.771 dry tonnes/day average in year previous to trial year of 0.389 dry tonne/day.  This difference, 0.382 dry tonne/day, would reduce sludge hauling by $592.9/day, with a payback of 5.7:1 on the cost of FGX3.

The second method of calculating sludge reduction does not take into account the shift in MLSS nor the alum usage.  Nor does it accurately reflect the day 61 through 120 time frame of the proposal because the daily operating data was not available, only the consolidated monthly statistics.  For this interpretation of the sludge statistics, we used June and July data for all four years, with July daily data of the trial year being calculated based on the first 27 days of the month.

We also reviewed the effluent data for the two years, and found that, overall, slight improvements were seen in the effluent quality.  It should be stated that the effluent quality was quite good to begin with reflecting the professional operation of the facility by its personnel.  We also believe that the potential for poorer effluent quality was present due to the increased pressure from the increased flow and loading in the influent.  We also were interested in observing the dissolved oxygen levels, considering the possibility of reducing aeration costs.  However, due to the way the aeration system is set up, the high operating MLSS levels, and the tremendous swings in Loads, we feel that it is prudent to continue to operate the aeration in the current manner.  For example, dissolved oxygen levels in both lagoons dropped in July, and can be correlated with the timing of the three spills.  Further, the lagoon temperatures of the lagoons were operating 3-4º C. higher than seen in the previous year thus exacerbating the D.O. issue.  However, effluent D.O. levels remained good.

Below is a chart showing the effluent phosphorus levels: 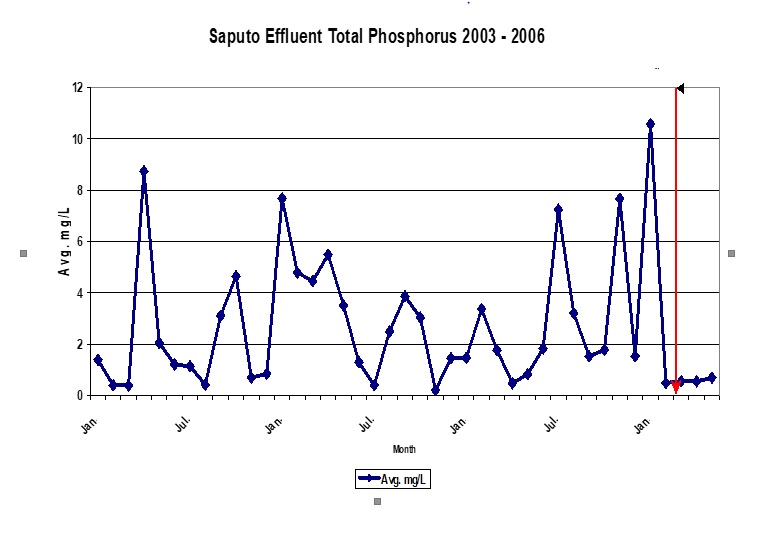 Contact us to discuss how we can help with your Treatment Solutions.